Lots of sewing got done this weekend just passed....five Dresden plate blocks for the swap I am participating in...the 4x5 Modern Bee Swap.

I have made up each of the blocks in the colour palate that my partners have requested...

For Lindsay who blogs @ www.lindsaysews.com 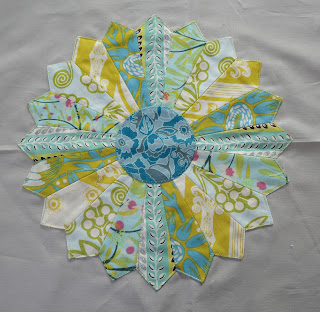 For Kelly who blogs @ www.kellylautenbach.typepad.com/ 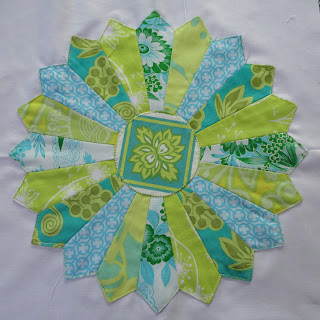 For Tiffany who blogs @ thiscraftyfox.blogspot.com/ 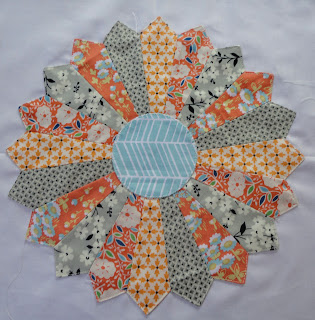 For Amber who blogs @ www.wambers-whimsies.com 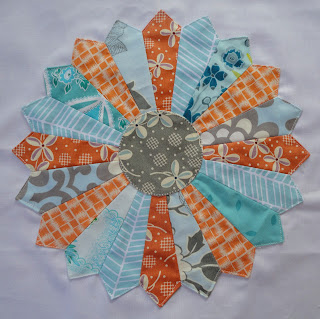 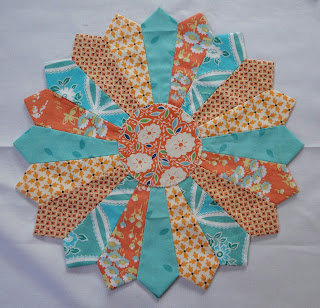 So far I have received two of the blocks from these girls, the rest will show up over the next couple of weeks, and they are looking lovely!

I loved making these Dresden Plates they came together so easily! And it was fun to work in the other colour palates...surprising that I had all of these fabrics waiting to be pulled from "The Stash"!

It's possible I might have too much fabric...but maybe I can squeeze a little more onto those shelves :)
Posted by Stacey at 6:45 AM No comments:

This my 50th blog...fancy having so much to say about quilts! In honour the occasion I have given my blog a bit of a makeover...actually it was a bit of an accident...I was playing around with the template and the header and I kind of accidentally published it....I never said I knew what I was doing! Anyway I was happy with the result...what do you think?

Well finally the borders for my Peppermint Sparkle are done...here's a not so good photo of the completed top! Who knew pink was difficult to photograph? 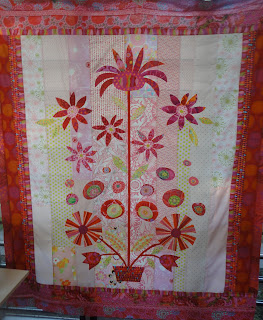 So now to sandwich and raw edge applique...mmmm not sure when you will see this baby again!!

So of course after this quilt there was plenty of pink scraps, so I have been playing around "making fabric" this is what I have done so far... 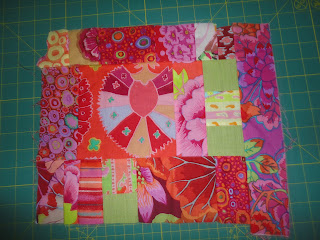 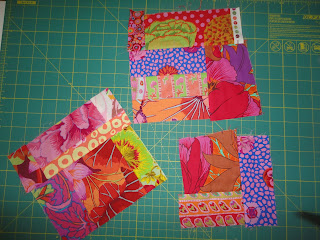 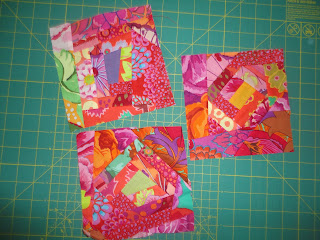 Hey where did that green come from? 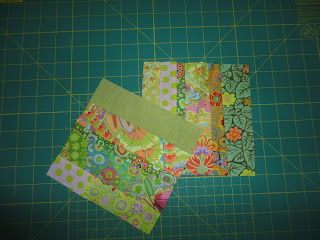 I am going to do a few of the blocks from the 15 minutes play blog...Block of the Month challenge...I am not going to do all of the blocks...but just have a play around with a few of my favs...what are you up to this week?
Posted by Stacey at 9:22 PM 1 comment:

In a brief break from blogs featuring pink fabric (Thank Goodness! Some of you are saying!), I had the pleasure of participating in a 12 hour "Quilt-In" with the local guild yesterday...the Darwin Patchworkers and Quilters...there were about 15 hearty souls to start with....by dinner time the numbers had dwindled so there was room to stretch out...I don't get to many of the guild's meetings so it was great to catch up with everyone and meet newer members.

I had changed my mind a hundred times over the last couple of weeks, as to what I should work on, then fate intervened, and the sister of my son's girlfriend, had twin boys on Thursday....Hamish and Lucas 2.25 Kilos and 1.75 kilos ....so tiny....they were 35 weeks old when born, and one of the boys had some breathing problems but the doctors said he would be fine. All of my children weighed around 4 kilos, actually the second child was 4.5 kilos, so big in comparision!

Anyway I digress...I love babies...so obviously it is the perfect opportunity to make baby quilts...so what is a great pattern to use when you are chattering at a 12 hour sewing? The split nine patch of course (sometimes it is called the Disappearing Nine Patch). Check out this charm pack and companion yardage of Basic Grey's Max and Whiskers. 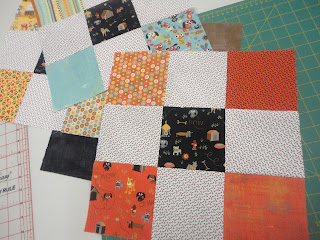 How cute is this fabric? I made up 5 blocks (using 20 charms squares) using the white as the posts... 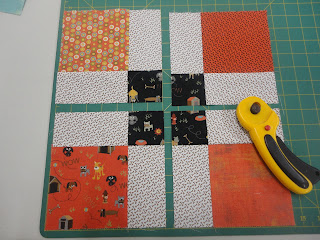 It looks very snazzy all sewn up.... 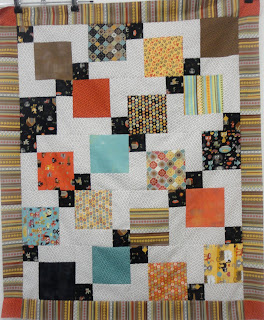 Then I made up another 5 large nine patch blocks using an ochre for the posts.... 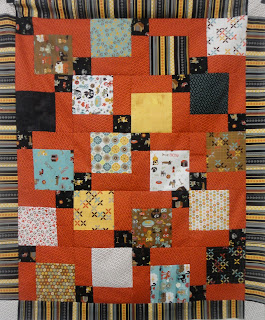 The backs are pieced up, so it's all ready to pin and quilt....I probably could have pushed on yesterday and got the pinning done...but I think I was talking too much!
The quilts are 37" x 30"...if you like this pattern and haven't tried it yet, check out the tutorial here or here. Actually if you google disappearing nine patch there is so many links...including a youtube video!
Breaking News.... Over at Canton Village Quilt Works there is going to be a free Block of the Month over 12 months, it includes quilters from Australia and America...it's calling me! Help!

Posted by Stacey at 9:49 AM No comments:

Can I cut this?

I never thought I would say this...but I don't know if I can cut this fabric! 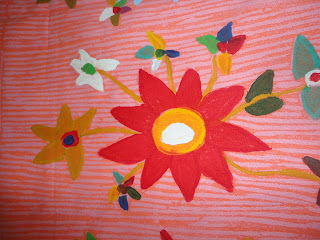 It has been so busy at work lately, I have been rushing from meeting to meeting, when I am not in meetings, I am organising meetings...but the other day, in between meetings, I was halted in my rushing tracks! In the window of an indigenous art shop was this fabric... 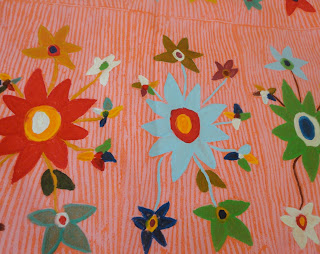 So I had to make an on the spot decision... buy or keep on rushing? I knew it would not be there when I was eventually able to come back...so I bought it! Well I had too...it was pink! 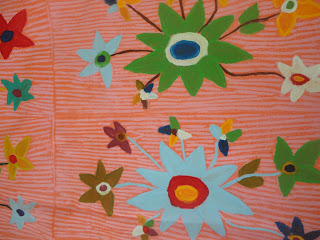 The lady in shop very efficiently processed my payment, and put the fabric into a brown bag, and off I went to my next meeting...I only got teased a bit about the brown paper bag, something about mafia payments... 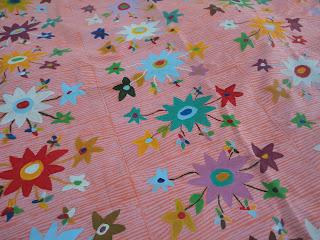 This gorgeous fabric is a cotton base cloth printed with a lino tile design, and hand painted flowers in acrylic pigment, by Helen Lanyinwanga of Babbarra Designs Maningrida, and of course it is a one off!

Maningrida is a small aboriginal community on the north coast of Australia...approximately 300-400 km east of Darwin.

Here we go...plugging away slowly at these blocks...lots of fun with pretty fabrics... 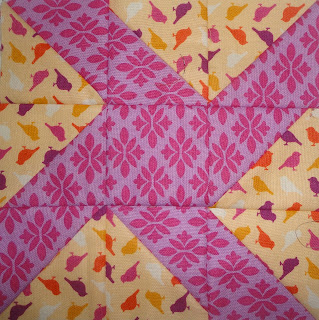 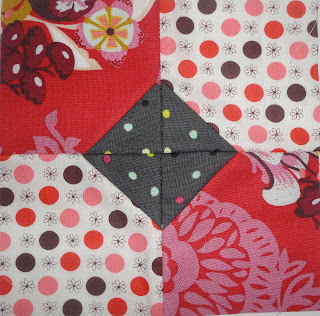 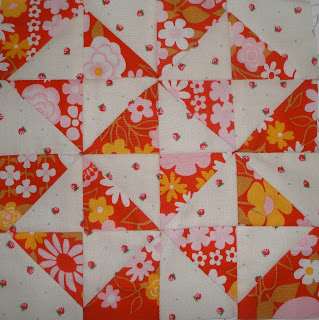 Block 11 Broken Dishes
(this is my fav!) 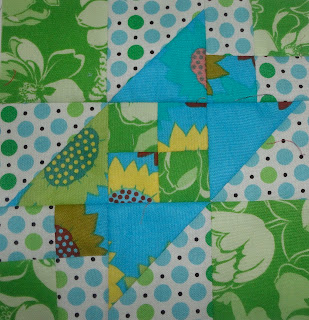 Block 12 Broken Sugar Bowl
(this is one is my least fav! Not sure if it is because it's in cool colours, or because it is a hot mess!)
I have another four blocks all drawn up ready to cut out...Next post on FWQAL could be time for a mosaic! Oohh I love a good mosaic!
Posted by Stacey at 6:54 PM No comments:

I don't why, but it has taken me 4 days to sit down and post these photos...it's almost time for the weekend again, and more sewing...yeh!!!

In my last post I showed all the bits of visoflex Vliesofix I had prepared, they were all the petal and leaf shapes that were needed to build this design. I got out my Kaffe pinks and started playing around.... 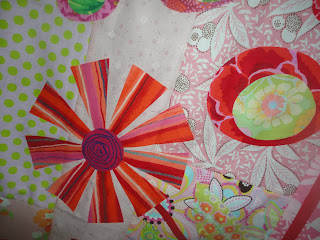 It's fun playing around with Visoflex Vliesofix! ... 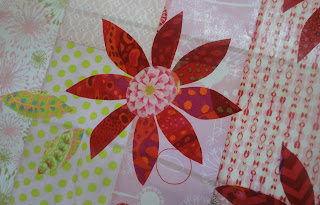 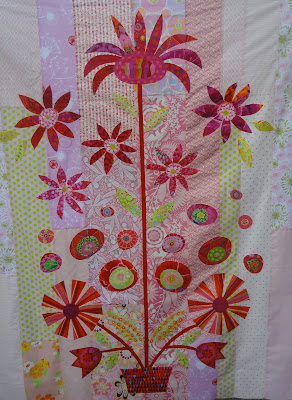 Next on this quilt is the borders, then I can do my quilt sandwich and start the raw edge applique...maybe I will do that this weekend!
Late edit: Vliesofix is an iron on fusible webbing with a paper backing, so you can trace your template onto the paper side, roughly cut out shape, iron it on to your fabric, precisely cut out your shape, peel off the paper and iron it to your background fabric,  ready to be machine appliqued....I think there a number of similar products with different names, but Vliesofix seems to be the most common fusible web  in Australia, so that's what I call it!
Posted by Stacey at 8:04 AM 4 comments:

Stacey
Mother of three, and avid quilter, I love all things bright and quirky. I am inspired by colour, beautiful things, and my mother who is also a quilter!